This week I'm so excited as finally, the House of B.O.B goes up, Tonia's been out in her garden upcycling a table, bench, and I've started another print pattern.

Wow wow wow! what a week, I have talked about this moment for about the last 12 years,

As many of our regular readers and followers know I am a Jeweller by trade selling my work all over the UK and internationally in the past, When I moved into my forever home in 2001 with Phil roughly a year later I had a workshop built, after neglecting it for some years and my career in Management retail and watches took off and having a wonderful career in London for a decade, I always held onto the dream of being self-employed again and due to health issues in the family in the last 3 yrs this dream has finally come true as the need for being nearer home became more necessary.

In 2015 Phil and I set up B.O.B and this has been more of a hobby than anything else up to this point. 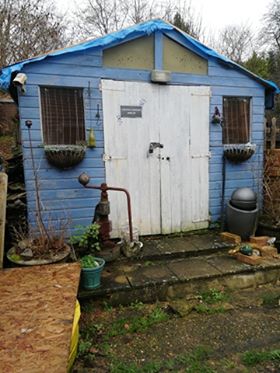 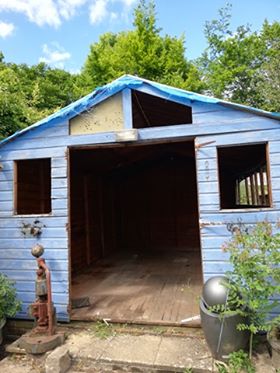 Our close friend Glyn, one of the B.O.B builders, came to help with the Build and over the last 3 days, B.O.B has risen from the ground.

After bringing the studio from the front of the house and stacking it in piles, it then had to be moved again into section piles, My poor Garden

Then the build commenced on one of the hottest days of the year, it was my job to keep the men fed and watered.

Laying out the base. 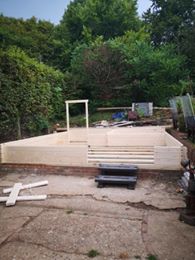 The walls going up, exciting,

This build was really progressing well,

Then the Heavens opened, what a day but the boys really welcomed the rain as it was so hot earlier.

The windows went in.

and this is where it finished on day one, Hemi and Dixie seem to like it.

Phil and Glyn started by building the front door frame.

Then the mezzanine got underway

This back wall so far has only been the challenging piece, just one piece that was warped caused a 2-hour delay, but between them, they solved the problem.

The roof beams now go in, just think I can get a few chandeliers up there.

A front view wow it's stunning.

By the end of the 2nd day the doors were on,

Tomorrow the roof goes on, how exciting 😍.

Day 3 and we are up early by 8.30 am the doors have locks on and the inner door is in place.

Day 4, Well the roof is going on it has taken a while but today the roof was on, as well as the overhang at the front.

Over the next few days, they hope to make a start on the roof tiles and maybe the floor.

Well House of B.O.B is in place now, I will keep you updated.

Tonia did her own wood upcycling project this week

She's been sanding down a bench hopefully ready to paint next week.

First, she sanded the top

She used her heavy-duty planer

And here's how it looks now

I started to sketch the piece last weekend

And I decided to transfer the idea to canvas.

I'm actually really liking this, first I thought I needed to see if the pattern was going to work out so I did some Photoshop and it looks like it will work with a bit of tweaking. 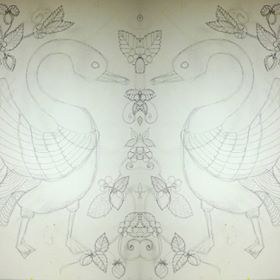 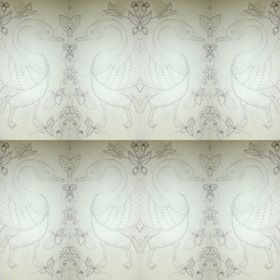 The swan bottom needs a space, other than that it's getting there.

Hopefully next week I might have some colour on it.

That's it for this week hopefully you

Have enjoyed the read.

Corcyra Tonia and Phil The Bobbett's (Angel and Rose.)

Bobbetts Blog No 84, The Kings of the British Sky.